“Your Criticism is Lies”, or “Why I stopped giving advice to writers online”

Recently, to broaden my horizons as a writer, I joined a bunch of writers’ groups online. I’ve learned a few things.

Almost a decade ago, screenwriter Josh Olson wrote an op-ed called “No, I will not read your fucking script“. I remember reading it and thinking that, even if he had valid points about why he would not do such a thing, he shouldn’t have been such a dick about it. Even so, one particular quote stuck out at me that I’ve hung onto for a while: “It rarely takes more than a page to recognize that you’re in the presence of someone who can write, but it only takes a sentence to know you’re dealing with someone who can’t.” 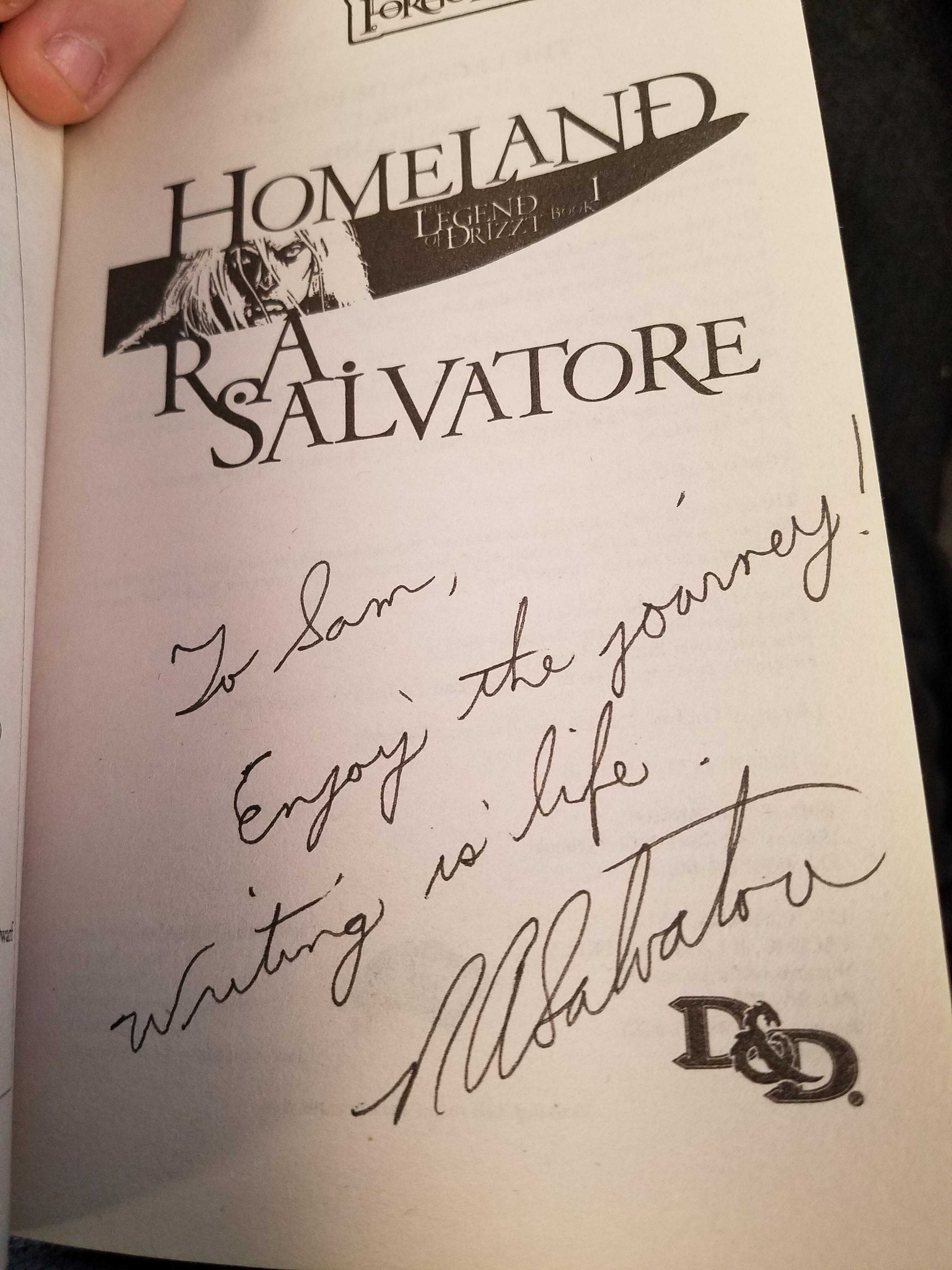 If you’ve ever gotten an autographed copy of The Wizards on Walnut Street, you’ve seen that I like to inscribe things like “You can do anything” and “I believe in you”. This is because when I met one of my writing idols, R. A. Salvatore, he inscribed something in a copy of his book Homeland, and I look at it whenever I’m feeling unmotivated. It made sense to me, then, that if I had the opportunity to help others and inspire them similarly, I would take the chance to do so.

Writers, by and large, have an ego. I’m sure it has to do with the toil of putting words to paper and spilling your soul all over the computer screen that makes one feel like what they have to say is truly important. And in a lot of ways it is…just not to everyone. This is why a focus on product that is not only well-composed by also marketable is so important.

This ego, however, becomes a massive hindrance when you are part of a writer’s group. It becomes hard to separate oneself from the work and view it objectively. This is why writers employ beta-readers in the first place. This is not to say that writer’s groups are not wonderful. I am part of one locally here in Cincinnati, and we help and support each other and have a great time. I’m glad to know these writers and I love working with them.

A funny thing happened online on a forum

When you go online, the problem magnifies. This is because the shield of the computer screen amplifies ego and boosts confidence, perhaps unnecessarily. On the other side it’s even worse–it becomes a lot easier to point out flaws on another person’s work without fear of reprisal.

There are a massive number of “writing groups” on facebook. People come, post excerpts and blogs, links, advice, inspirational memes, and all sorts of other things. I am a moderator in one of the largest ones, which has almost 130,000 members at the time of this writing. I made a commitment to myself that I would give honest feedback, try to keep it encouraging, and let the writer make their own decision. “This guy… wanted real criticism,” Olson says in the above article, “[but] they never do, of course. What they want is a few tough notes to give the illusion of honesty, and then some pats on the head. What they want–always–is encouragement, even when they shouldn’t get any.”

And I, thinking I was less of a dick than Josh Olson, wanted to prove him wrong.

Your criticism is lies

Recently a person in one of these groups shared an excerpt about a medical procedure. I, wanting to give not only honest but accurate feedback, consulted with a doctor friend of mine who is one of my go-to people for fictional injuries. I asked him to take a look at the excerpt and he replied with a several-paragraph, detailed, and very clinical response as to the accuracy. I relayed this information to the writer and suggested that he, too, consult an expert.

This was his response. 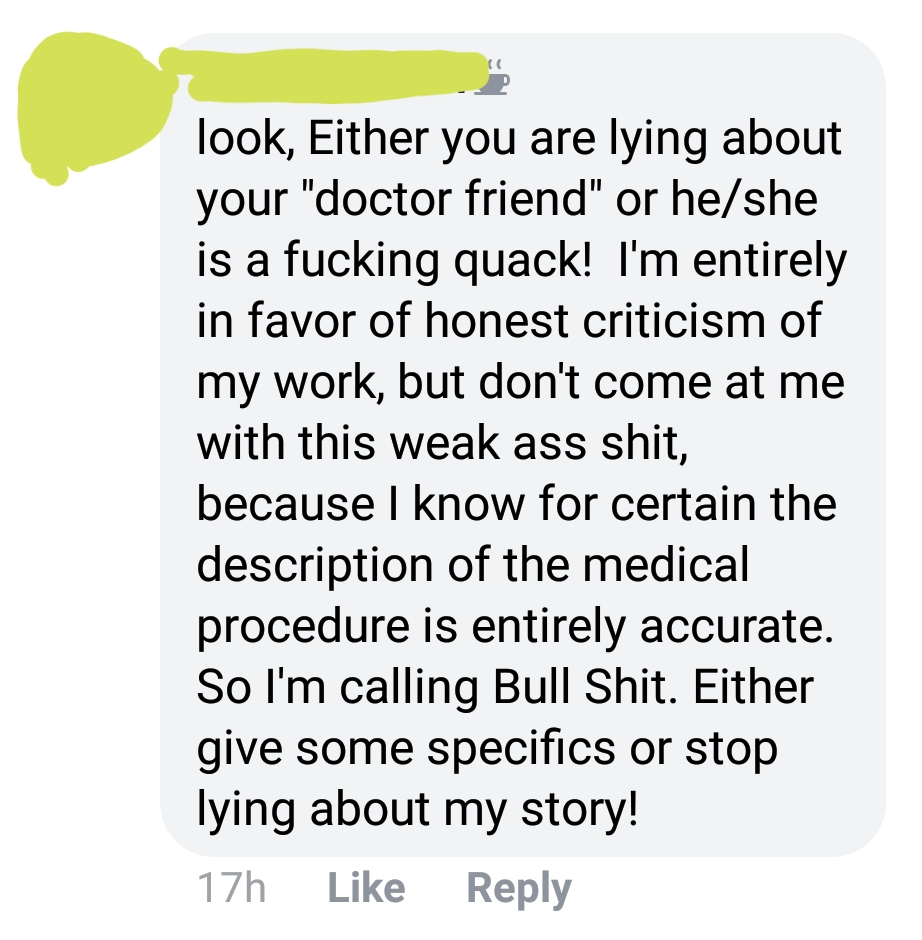 In examining this response, I was understandably taken aback. I didn’t feel like I had done anything wrong. The author had asked for honest criticism and I thought I was up to the task.

But the problem is, the author didn’t want honest feedback. He wanted to be told he was great and that the whole thing was perfect. But it wasn’t. And I was the guy who thought I was doing the right thing by telling him so. But he, empowered by the shield of anonymity that the internet provides, decided to take the pointers on accuracy and explode in a pseudomasturbatory rage at the person who was genuinely trying to help.

I’m not an expert. I’m nowhere close. I’m still a learner. I’m still a neophyte. I am a guy who wants to write books and inspire people and make them happy. But here, I’ve learned that the avenues for that are far more limited than they first appear. There are contexts which allow these things to occur. As I mentioned before, this is why beta readers exist in the first place. And when it comes to beta readers, there is an understanding that the beta reader is doing a job, not a favor.

Perhaps you think that I’m a jerk. Perhaps you think that writers like me, Olson, and Tess Gerritson who adopt similar policies are jerks. But I hope that you, as a writer or aspiring artist, recognize that this comes from a hard lesson taught by people who were too weak to stand up to criticism and critique. I can only hope that, when the time comes, you will be better.

I believe in you.